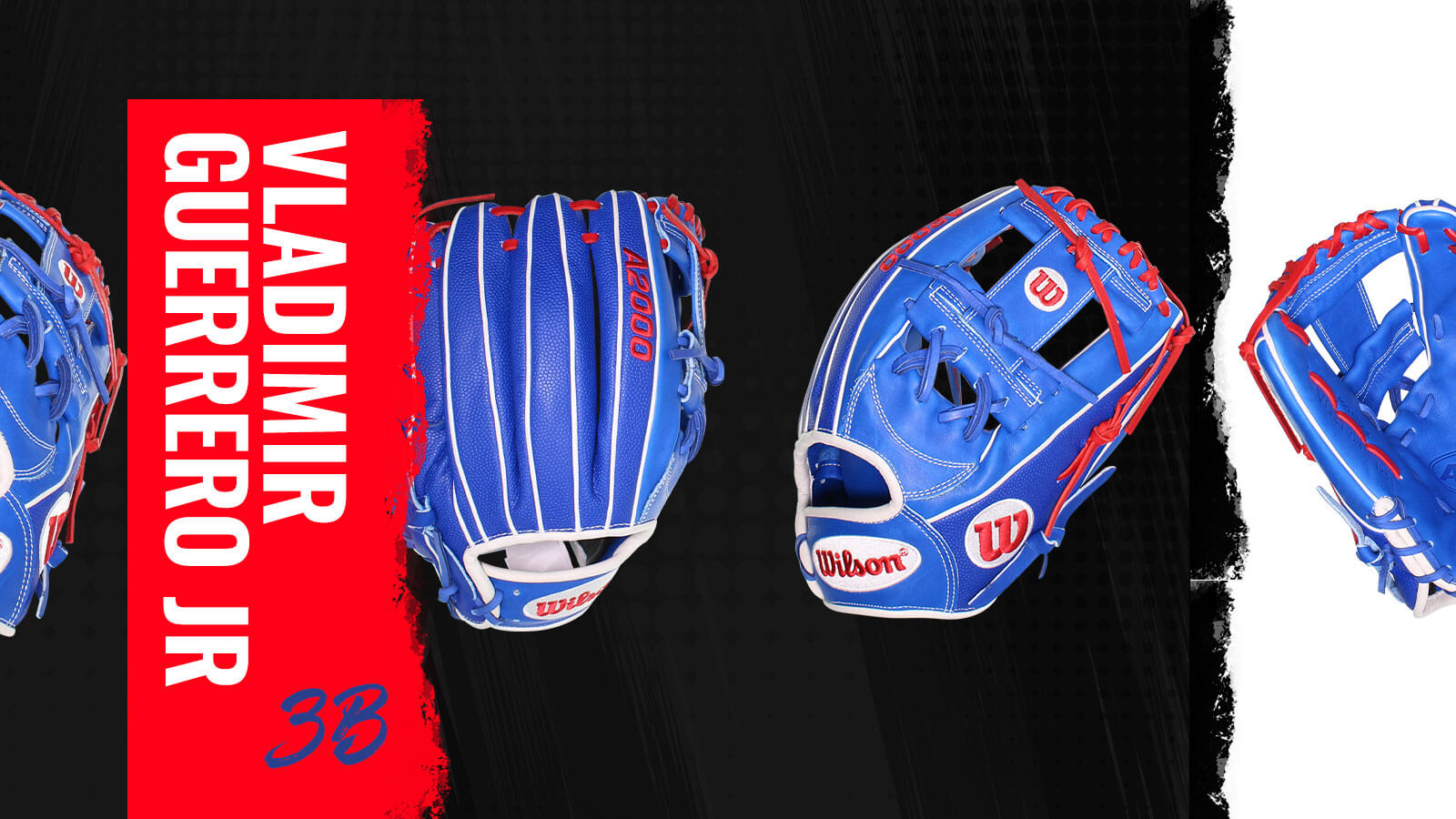 Left to carry the torch of his illustrious surname, Vladimir Guerrero Jr. had a lot of expectations as a rookie in 2019. His father, Vlad Sr., arrived on the big league scene in 1996 and his early success burgeoned into 16 big league seasons, over 400 homers and an eventual election to the Baseball Hall of Fame. The younger Guerrero had some growing pains during that first 2019 season. But after being a surprise selection for the 2019 Homerun Derby, he let everyone know that he would undoubtedly be a star very soon.

Enough about his hitting though, let’s get to the glove inspired by Vladimir Guererro Jr. When he debuted in 2019, Guerrero Jr. spent a significant amount of time manning the hot corner, which is exactly where the inspiration for his beautiful glove came from. 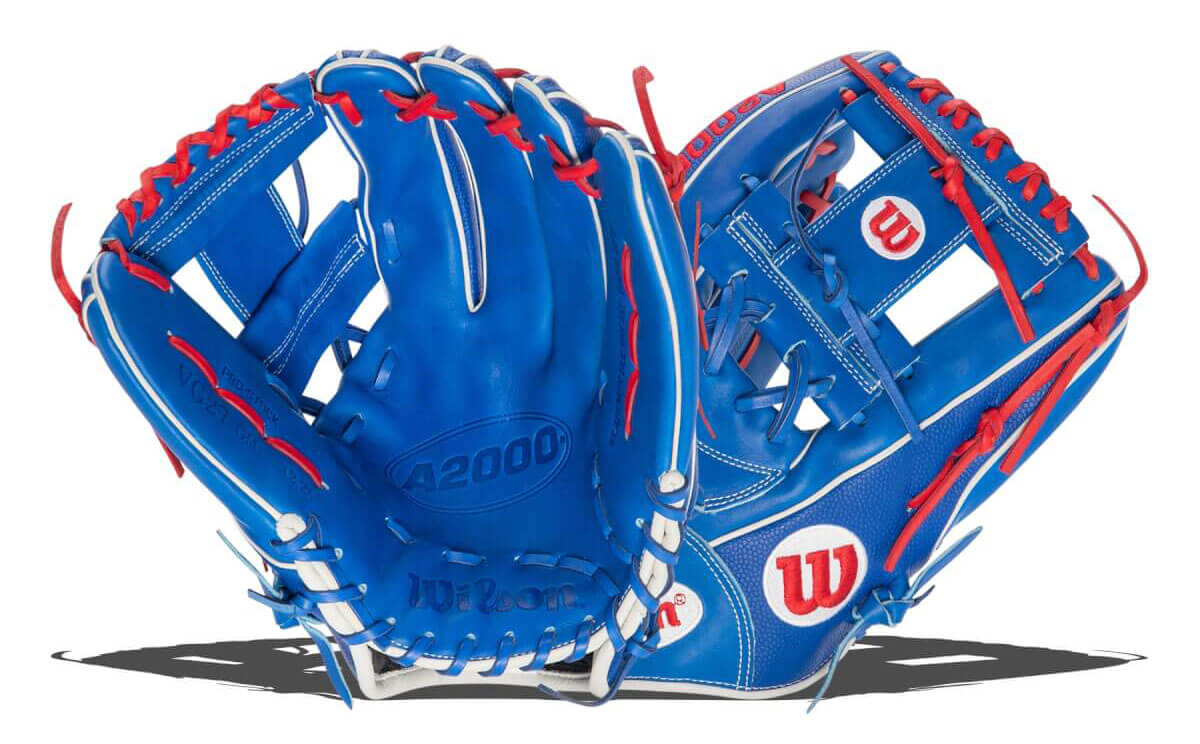 Vladimir Guerrero Jr uses a Wilson A2000 that is adorned with beautiful blue leather and red lacing. Aside from the colors, the first thing that players are going to notice about Vlad’s third base glove is that it is huge for an infield model. At 12.25-inches, the most notable infield glove to match it in regard to length is Kris Bryant’s Pro Preferred. However, do not let the extra length be a deterrent to handling third base with this Wilson A2000.

Think about it this way, a shorter glove is going to be advantageous when being required to make a bunch of quick exchanges or glove flips (like a 2B or SS). But when playing third base on a baseball field, you don’t have to worry as frequently about quick exchanges or flips. Therefore, you might as well level up in regard to length and get something that will cover more area for you. As well, that extra length will give most third basemen a little extra confidence when fielding with their backhand or charging in on a bunted baseball.

There may be some who scoff at this suggestion, but with this being a slightly longer glove at 12.25-inches, it could be used as the sole baseball glove for a player who consistently roves between the infield and outfield positions. It definitely will possess more of an infield shape and look (especially due to it featuring Wilson’s H-Web), but the Glove Experts at JustGloves believe that it could handle the demands of the outfield if needed. Let’s face it, baseball gloves are expensive. If you want a glove with some versatility that could prevent you from having to make a second glove purchase, Vladimir Guerreo Jr’s glove is here for you!

We couldn’t highlight Lil Vlad’s glove without addressing one of its coolest features: Wilson's SuperSkin backing. Most of you know the story with SuperSkin, but essentially, Wilson has added a basketball-like material to the backing of the glove. That material is:

There are probably some who would say “if you like how SuperSkin looks then buy it because it’s better than normal leather."

Currently, Vladimir Guerrero Jr. plays first base for the Toronto Blue Jays. And since his rookie season of 2019, Guerrero Jr. has played less and less time at 3rd base. As of this writing, he has yet to play defense at the hot corner during the 2022 season.

Vlad is now spending most of his time playing first base or hitting DH. However, this glove is still an absolute beauty and while we’re able to get it in stock, we’ll keep selling it! If you would like to get a peek at his 12.5-inch A2000 that he uses for 1B (it’s similar to a Wilson 1620 pattern), here you go.

Vlad makes the most noise with his signature MLB Prime Birch Bat made by Louisville Slugger. Although you can’t see it in the image above, the big thing with this bat is that there will be no cupping on the barrel end of the bat. This makes it a behemoth of a wood baseball bat to get through the zone with authority. It’s definitely going to be a bat for the big-time sluggers out there!

There you have it! Hopefully we answered your question about which glove Vlad Jr wears. If you have any additional questions, our Glove Experts are standing by to help. You can give them a call at 866-321-4568, email at experts@justgloves.com, or click here to live chat. Or, if you're in the market for a new baseball glove or softball glove, we've got you covered. We're JustGloves and we are here for you from Click To Catch!

Filed Under: Baseball Gloves MLB
Chat Us
You can compare a maximum of four items.
Please remove one item to add another.
Add up to 4 items to compare.
Show Comparison
ERRR