What Is Wilson's SuperSkin All About?

When you think about it, baseball gloves have remained extremely similar for the past 100+ years. It’s a piece of leather, handcrafted and molded into a shape akin to that of an over-sized mitten.

Position-specific gloves have appeared, like that of a first baseman’s mitt or a catcher’s glove, but nonetheless, essentially the same leather material is utilized. Wilson, with the help of an all-time great baseball player, questioned why this was the case. They ultimately created the material we all know as SuperSkin. JustBallGloves.com dives into this SuperSkin and learn about the history, material composition, and overall benefits.

The History of Wilson’s SuperSkin

Barry Bonds is unquestionably one of the greatest baseball players of all-time. Bonds was amidst a legendary career but hadn’t ever feel that his glove was on the same level. He sought a lighter option that wouldn’t sacrifice the overall durability or performance. That’s when he went to Wilson’s Official Glove Guru, Shigeaki Aso. Aso had developed gloves for hundreds of MLB players, including first-ballot Hall of Famers Greg Maddux and Kirby Puckett. Aso was nearing legendary status in the glove-ranks, but he had never attempted to tackle the question, “How do you make a glove lighter?” He soon realized that this wasn’t an impossible task.

“In Chicago at Wilson LABS, sitting a mere 10 feet from Aso’s workstation on his co-worker’s desk was a material being tested on basketballs.

Aso borrowed a few sheets of material and went to work. The first glove prototypes made with the Evolution Basketball material were well-received, but they weren’t quite up to Aso’s standards of perfection. ‘The glove was still a bit heavy and it was picking up dirt,’ he says. ‘So we had to keep working at it.’”

After a long trial period, filled with many failed attempts, Wilson and Aso had developed the SuperSkin. Aso delivered the glove to Bonds. Barry was elated. Since then hundreds of MLB players have gone on to use a SuperSkin glove in a game. 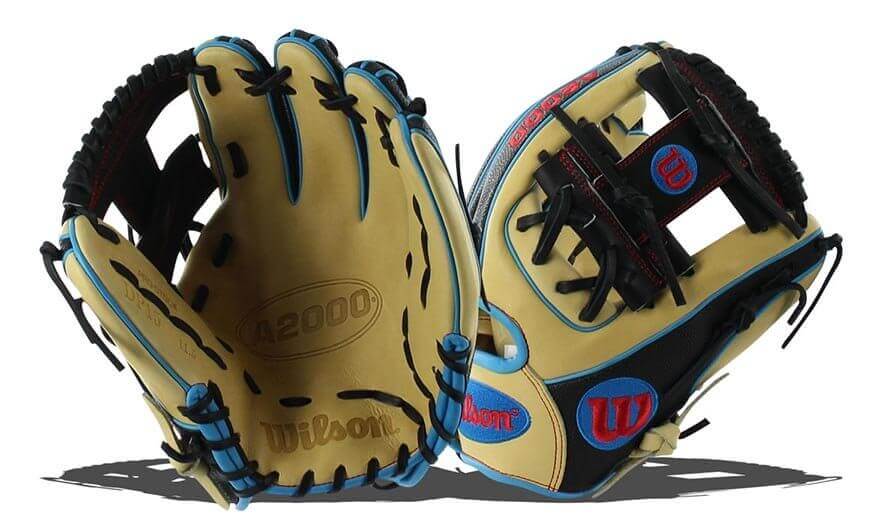 Overall, the true composition of the SuperSkin material is top-secret. However, what we do know is that it is a microfiber material that has been created to deliver the highest level of durability at the lowest weight possible. The water repellent material will never get weighed down by rain or dew. Furthermore, the beautifully molded microfibers create a very simple break-in period. All-in-all though, others have often tried to replicate the construction and fallen short. However, it is safe to believe they will continue to try because the benefits are so very apparent.

What do you think of Wilson’s SuperSkin gloves? Any interest in picking one up? Let us know in the comments.

Still have questions about baseball gloves or Wilson gloves? Don’t hesitate to give our Glove Experts a call at 1-866-321-4568 send us an email at experts@justballgloves.com or click here to live chat with our glove experts. And remember, with our customer service, we'll be here for you from Click to Catch!

Filed Under: Technology & Terminology Vendors / Brands
Chat Us
You can compare a maximum of four items.
Please remove one item to add another.
Add up to 4 items to compare.
Show Comparison
ERRR