The Fastest Baseball Pitch Ever

Catching the speed of a pitch seems almost given, as modern day fields broadcast speed on the screen as soon as the baseball is thrown. But the history of baseball did not always have such precise techniques to catch pitch speed. Luckily, some of the best minds are able to analyze what data we do have from the past and estimate how it stacks up against today’s players.

In 1974, Nolan Ryan became the first Major League Baseball pitcher to be tracked by a radar during a game. His fastball topped out at 100.8 miles per hour., earning him the nickname "The Ryan Express". But, experts have pointed out that Nolan Ryan's ball was being measured right before it crossed the plate. Today, ball speed is recorded once it leaves a pitcher's hand. So, technically, Nolan Ryan's fastball could have been upwards of 108 miles per hour, which would hold the record for the fastest baseball pitch ever thrown.

Currently, Aroldis Chapman holds the record for fastest recorded pitch speed with a 105.1 miles per hour pitch on September 24, 2010, in a game against the Padres. Even better, Chapman accomplished this feat during his rookie season! But, how long will that record stand with pitchers throwing faster? JustBallGloves.com tries to tackle the question, What is the fastest speed you can throw a baseball?

In 2017, professional pitchers accumulated 1,017 fastball pitches that surpassed 100 mph. That's a hefty number compared to 10 years earlier, in 2007, where there were only 196 such baseball pitches. But while fans have taken more interest in pitch speed, pitches haven't exactly increased in their velocity. Part of this speed slump comes from how pitches have been measured and the techniques used to increase pitch speed:

A baseball is a sphere that weighs five ounces and is also wrapped in leather, and it has been since the 1970s. Unfortunately, there aren't a lot of ways to maximize the speed of a pitch without reducing the weight of a baseball. So we’ll have to wait a little longer for a change in the fastest pitch, but batters might not mind.

Fun fact: a 100-mph fastball crosses home plate in less than 400 milliseconds. By comparison, a batter's swing takes (on average) 150 milliseconds. Given the reaction time, it's no surprise that so many batters swing-and-miss at a higher rate when a ball is triple-digits. 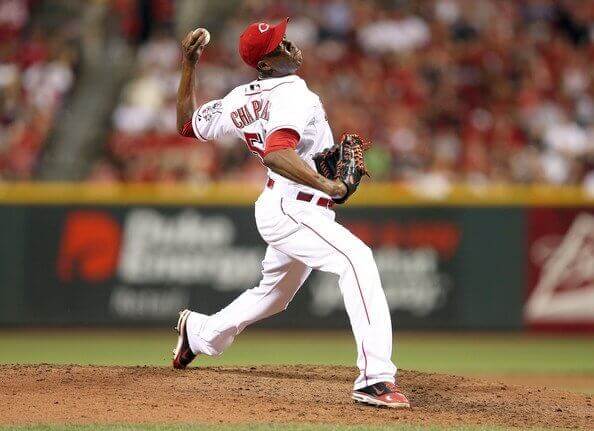 In conclusion, given the metrics involved and the minimal amounts of ways to maximize a pitch, don't expect to see a baseball thrown faster than 110 mph any time soon. In reality, Chapman's 105.1 mph fastball might be the fastest baseball pitch we see until the mound is altered or the ball is changed.

Have questions about baseball gloves? Don’t hesitate to give our Glove Experts a call at 1-866-321-4568 send us an email at experts@justballgloves.com or click here to live chat with our glove experts. And remember, with our customer service, we'll be here for you from Click to Catch!

Filed Under: Uncategorized
Chat Us
You can compare a maximum of four items.
Please remove one item to add another.
Add up to 4 items to compare.
Show Comparison
ERRR