There's nothing quite like a web gem! Who doesn't love a highlight montage of video clips showing Derek Jeter breaking to his right, fielding with his backhand, jumping high and firing to first?

But we can be blinded by the web gems. We see the athletic potential and think to ourselves, "Well, that guy can make that difficult play, he must be able to do everything else well too". Unfortunately though, that mindset can deceive us as fans.

Derek Jeter, a Rawlings man, was certainly an exciting defender, but when experts look deep into his game as a defensive shortstop, they find some glaring holes. But despite his shortcomings, Jeter was awarded with 5 Gold Gloves during his career.

On the opposite end of the spectrum, there have been players like Lorenzo Cain of the Kansas City Royals and Milwaukee Brewers. The advanced defensive metrics indicate that Lorenzo and his Wilson glove hunted baseballs in the outfield just about as well as anyone during a stretch of years from 2013 to 2019. However, during that time period he only won a single Gold Glove which came in 2019; the last year of his defensive stretch of dominance.

In recent years, the Gold Glove Award's legitimacy has been shored up as defensive metrics have begun to play a part in the selection process, but to many, the winners still seem to be selected based on popularity and prior reputation. You might be saying to yourself, "What a shame...how are players like Lorenzo Cain getting their day in the sun?" Well, that is where the Fielding Bible Awards have come along to save the day!

When Were the Fielding Bible Awards Invented?

In 2006, the Fielding Bible Awards were voted on for the very first time. And although the Fielding Bible website does not shed much light on the reason behind the creation of the award, it is fair for one to imagine that they were created in response to the belief that the Rawlings Gold Glove Award was not always ensuring that the best MLB fielders were receiving the award.

In that first class of Fielding Bible Award winners, we saw Ichiro Suzuki earn one in right field. Ichiro had been playing quality outfield since he first came to the MLB in 2001. And even though web gems can be blinding to overall defensive prowess, this writer has a hard time thinking about Ichiro and defense and not bringing up this throw from his rookie season...

What is the Difference Between the Fielding Bible Awards and the Rawlings Gold Glove Awards?

Three big difference that exist between the the Fielding Bible Awards and the Gold Glove Awards are the following...

Let's take an in depth look at each award... 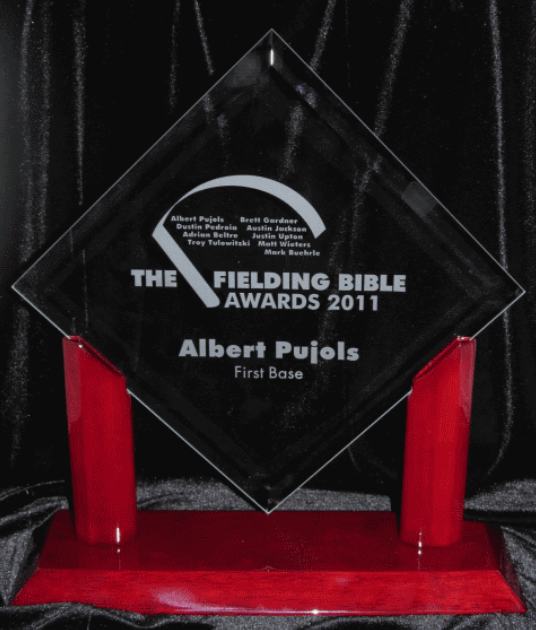 Are the Fielding Bible Awards or the Rawlings Gold Glove Awards Better?

In regard to being able to declare "this player was the best defender at this position for this season", we are going to have to say that the Fielding Bible Awards do the best job. The knowledge of who is voting, the limited amount of awards and the transparency of the voting process make these awards truly seem like the most legitimate defensive award that a Major League Baseball player can earn.

BUT...you have to hand it to the Rawlings Gold Glove Awards. If the job of the award is to bring attention to the defensive side of baseball, the Gold Gloves are an absolute success. The iconic look of the trophy that players receive, the fanfare that Rawlings has been able to create surrounding the announcement of the the winners and the never ending debates over who should have won the award in a specific year make the Gold Gloves extremely fun.

We certainly believe that there is plenty of space witin the baseball world for both the Fielding Bible Awards and the Gold Glove Awards to exist!

We hope you know a little bit more about the Fielding Bible Awards than you did 10 minutes ago! And if you're interested in buying a glove, consider looking at the most popular gloves we are carrying right now in the grid below. If questions still persist, please reach out to our Glove Experts through phone at 1-866-321-4568, via email through experts@justgloves.com or by LIVE CHATTING right here.

Filed Under: Baseball Industry News Lists MLB
Chat Us
You can compare a maximum of four items.
Please remove one item to add another.
Add up to 4 items to compare.
Show Comparison
ERRR